HOW IT ALL STARTED

Rechto Cup started back in the spring of 1977, where employees from the local shipbroker Rechnitzer, Thomsen & Co. Ltd. during a well-deserved lunch break paid a visit to the restaurant/pub Duus Vinkjaelder in the centre of Aalborg. (Duus Vinkjaelder is situated in the basement of Jens Bangs Stenhus, probably one of the most well-known buildings and attractions in Aalborg. Apart from a single beer, the lunch will consist of 2 sausages w/bread and of course with the popular mustard, which is well-known to many of the locals).

These were the days, when indoor football in general and tournaments/cups, both on club-level as well as company tournaments, were very popular all over Denmark. Aalborg Firma Sport, c/o the local shipping co. Aage Christensen had already in the beginning and mid-seventies held some tournaments in the venues Idraetshallen and Stadionhallen (where Rechto Cup takes place nowadays). These tournaments were fancied by a lot of the locals within the shipping industry in Aalborg. Also they inspired employees from “Rechto” (Rechnitzer, Thomsen & Co. Ltd ) to try start up something similar again.

Once discussed the employees went straight into action, and the very same afternoon, they contacted a local sports-arena Loevvanghallen (in Noerresundby), where one of the Rechto-guys had a good connection to an employee from the nearby school; Loevvangsskolen. They bought into the idea too, and soon thereafter necessary permissions from the local authorities (Community of Aalborg) and not least a consent from the local Lindholm Badminton Klub, who were actually entitled to use the arena after school hours, were in place. 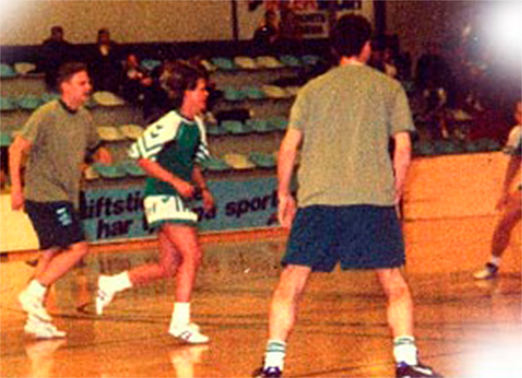 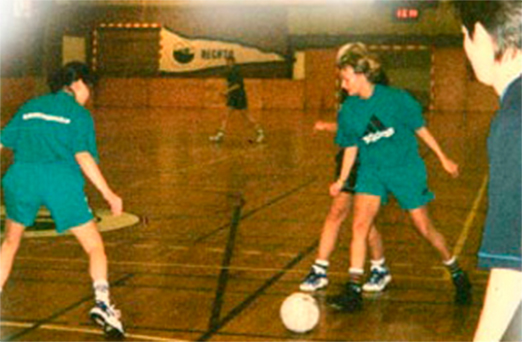 The first Rechto Cup took place on Sunday 8 January 1978 with 16 teams participating. They were all men's teams and all local teams from Aalborg. It was however allowed to participate with 'mixed' teams (like it is today), as not all companies were able to participate with own employees only. Winners of the first cup in 1978 were Aalborg Shipping & Spedition, runners up were Samson Transport Co. and with Aage Christensen in the 3rd place.

Already the year after the first women's teams participated, and the participating teams in the men's competition were also no longer only locals from Aalborg. The 1979 cup saw Aalborg Shipping & Spedition ending up as the first winner in the women's competition, with Rechto, Bendix, TK Nord and GFL in the following places.

Loevvanghallen was a fantastic venue for the Rechto Cup. A fairy small and intimate arena, where all participants, being it players or spectators, were very close. You simply could not avoid getting in touch physically and verbally, when you fought your way along the playing arena to reach either the dressing rooms or the cafeteria. It was very good times, but as the interest in participating kept growing, the problems escalated proportionally. We could maximum accommodate abt 80 teams totally in a very tight program, starting Saturday morning 6.30am and with the last matches played Sunday around 8.00pm. This naturally caused some problems, especially for guest travelling from Copenhagen or abroad.

In 1981 we were a total of 70 teams, being 58 men's teams and 12 women's teams. The year after we were up to 89 teams, being 68 men's and 21 women's teams and for the first and only time, we had to play at 2 different arenas with 15 km in between them, (Loevvanghallen and Gistruphallen). We simply did not have the time to have 192 matches played within our allowed time in one arena only.

This situation was not durable and in 1983 the management consequently reduced the number of participating teams to 56. Despite this attempt to arrange a tournament being responsible sporty wise and played within a fair number of hours during the weekend, it all again ran out of hands. The number of participants increased during the eighties. Old boys groups were introduced in 1986 and in 1989. The last year the tournament took place in Loevvanghallen, the total number of teams were up to 104, divided on 64 men's, 24 women's and 16 old boys teams. With a massive participation like this and now matches steadily being reduced in time from 9 minutes to 6½ minutes, it was finally over with Loevvanghallen being the venue for Rechto Cup.

Another issue was of course the traditional dinner party Saturday evening. Participants hardly had time enough to play the last of Saturdays matches, before the party started in Hotel Hvide Hus, Hotel Storvorde or the establishment Ambassadeur. Time was up for a change of venues!

The first couple of years, there was no party after the sporting event and matches. In 1979 we started this tradition at the dancing and amusement establishment Ambassadeur in the center of Aalborg. In the years 1981-1983, the party was moved to Hotel Storvorde, situated about 20 km south-east of Aalborg. Hotel Storvorde was in those days a well-known and well visited hotel, where people from both city and countryside would go for a dance and drink(s). Being situated this far from Aalborg, we of course had to arrange busses from and back to Aalborg for all participants, which was close to 300. In these days, the music was delivered by the band "Voodoo", and if you needed a break from the music or dance, you could go upstairs for a more quiet venue, where the local famous Poul Erik Krogen would entertain with his jokes and stories.

But soon also Hotel Storvorde turned out to be too small for the party, and again the management had to look for alternatives for partying, and Hotel Hvide Hus was chosen. Once again, the the development of the tournament and the overall success of the entire event “ran out of control”. Up through the eighties the number of participants increased from 350 in 1984 to 600 in 1989, which was in fact more than Hotel Hvide Hus was able to accommodate in one floor at the hotel. So it was once again time to look for other alternatives… 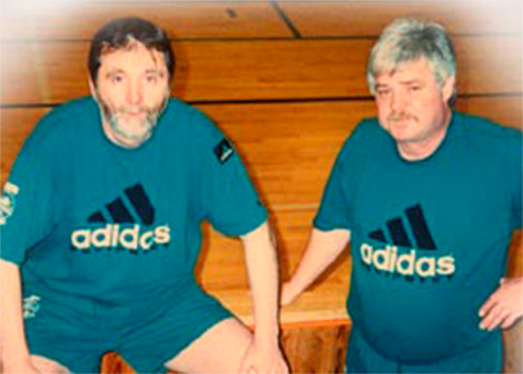 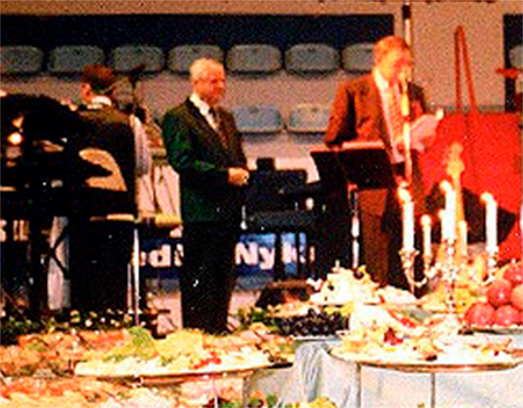 In 1990 we found the perfect place, Aalborg Stadionhal, where the tournament today still takes place. Here we had the possibility to play matches in 2 arenas (HAL 1 and Hal 2) at the same time, along with some good premises for the Saturday night party, being HAL 1 with a capacity of about 1.000 guests/participants. The first year in the new premises, Aalborg Stadionhal, we welcomed around 700 participants.

The same year also saw the start of the tradition with music being delivered by the band "BONGOES”, and for almost 15 years, they were more or less considered being the 'house-band' of Rechto Cup - and they did very well…!

This tradition however came to an end, and "THE BATS" took over thereafter up until and including 2014. Now a new 'house-band' has found its' way to RECHTOCUP and this year we are pleased to present "SIGNE AND THE SIGNS" to our guests, who undoubtedly will deliver a spectacular performance worthy of the heritage they will be lifting. Parts of the band have however played with both "BONGOES" and "THE BATS" and hence we are confident they will fully live up to our expectations.

The success continued - and still does. In 1996 we had 146 teams participating, which is still the record. This year we welcomed a record number of 1.020 guests/participants for the party, which is the absolute maximum number, that HAL 1 can accommodate and also the maximum of what is allowed by the local authorities.

We are still quite a few people, who has attended the tournament from the very beginning, and among the participants, we know of several, who has attended Rechto Cup for 25 years or more. Well done. We have enjoyed it, and we still do.

We thank you for your interest in the tournament and hope that the tradition will continue for many years to come.

Any cookies that may not be particularly necessary for the website to function and is used specifically to collect user personal data via analytics, ads, other embedded contents are termed as non-necessary cookies. It is mandatory to procure user consent prior to running these cookies on your website.